The flip clock turns to 6:00 and the radio starts:
“Then put your little hand in mine. There ain’t no hill or mountain we can’t climb. Babe, I got you babe…”
followed by mindless babble from the disc jockeys.

This is, of course, the iconic, repeating scene from Groundhog Day – the 1993 Bill Murray classic in which Murray plays a weatherman trapped reliving the same day over and over while covering Groundhog Day celebrations in Punxsutawney, PA. Lately, it feels a bit like we are living our own version of Groundhog Day – an endless, unbreakable cycle of the same day at home. Each morning seems just like those of the past three or so weeks as the efforts to slow the COVID-19 pandemic continue.

As mentioned in our previous COVID & the LCFS updates, the coronavirus has certainly drained value out of the economy and the oil patch. Below we offer an updated look at some selected trends.

First, in slightly more than a month, the S&P 500 went from a record 3386 on February 19th to a low of 2237 on March 23rd, a loss of 34%. As shown in the figure below, since March 23rd, the index has been trending upward and is now down just 16% from February 19th. In the data, however, there is a glimmer of hope: It appears that the extreme market volatility observed in March has decreased in April. 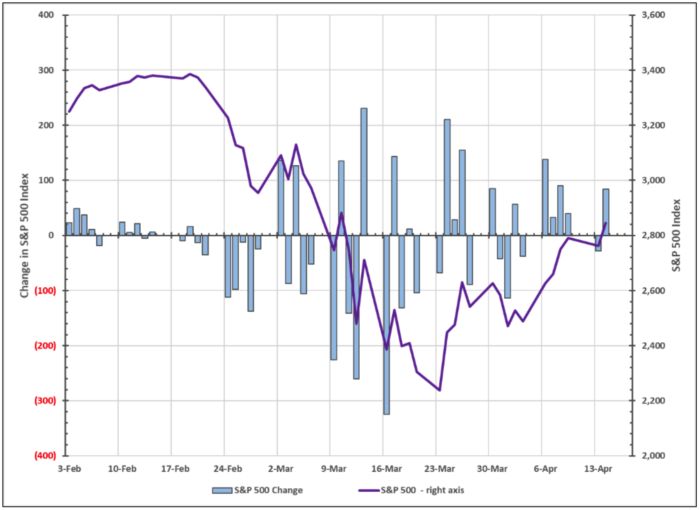 Next, we take a look at two specific areas of the economy which have taken a significant hit from the COVID-19 fallout – the oil patch and transportation energy. (Stillwater Senior Associate Adam Schubert also covers the decline in air travel and jet fuel demand in another article out this week).

Oil Prices Drop Dramatically
In the oil patch, sharp price declines have occurred. The downward price trend since November for West Texas Intermediate (WTI) crude, the marker for U.S. crude oil prices, is shown in Figure 2. The oil patch has been hammered by two forces.  First, there is added supply as Russia and Saudi Arabia failed to agree on production cutbacks on March 9th, and a market-share war ensued. Second, the global oil trade has seen massive pandemic-related demand destruction. In late March, WTI crude prices were in the low $20-per-barrel range. Around the globe, however, refinery runs are being cut because of reduced demand and dwindling storage capacity. Crude tankers are now being chartered for storing rather than transporting crude. 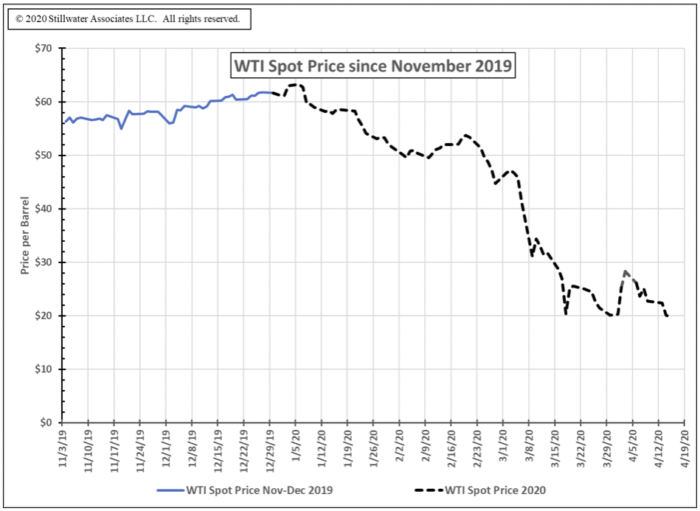 In the past week, crude oil prices have risen some as an agreement among oil-producing countries was reached to reduce crude oil production by about 10 million barrels per day, or approximately 10%. The market’s response to the production cuts has been muted since it is thought that the COVID-19 demand destruction may be 20%, so the production cut will not solve the imbalance, but rather extend the time until all the storage is full.

In our March 20th COVID-19 “flash report”, we expressed how puzzled we were by the statistics published at that time by the U.S. Energy Information Administration (EIA) and California Energy Commission (CEC). That data had not shown a downturn in gasoline demand even as we heard anecdotal evidence that gasoline and diesel demand had dropped off (i.e. people had cut back significantly on driving due to stay-at-home orders). The lack of statistical evidence may have been due to inventory accumulating in the supply chain past the refineries and bulk terminals or simply a data lag. At any rate, the March 27th data did show that gasoline had fallen off dramatically nationwide, in Petroleum Administration Defense District (PADD) 5 – which is comprised of the West Coast, Hawaii, and Alaska – and in California on a stand-alone basis. The data for the week ending March 27th indicated that U.S. gasoline demand fell by 25%, PADD 5 dropped by 38%, and California declined by 32% compared to the year-to-date average through March 13th. EIA’s April 3rd data showed a further decline in gasoline demand with U.S. and PADD 5 gasoline demand both down 43% and California seeing a decline of 41%. Today, EIA published the latest data for the week ending April 10th. Those data show that U.S. gasoline demand has leveled off, now sitting at a sustained decline of 43%, PADD 5 has declined a bit more to 45%, and California demand is showing an uptick but still at a 38% reduction from the year-to-date average through March 13th.

With social distancing and self-isolation orders in place, we expect the data to continue showing similar levels of COVID-19 demand destruction in the coming weeks. The demand trends are shown below in Figure 3. 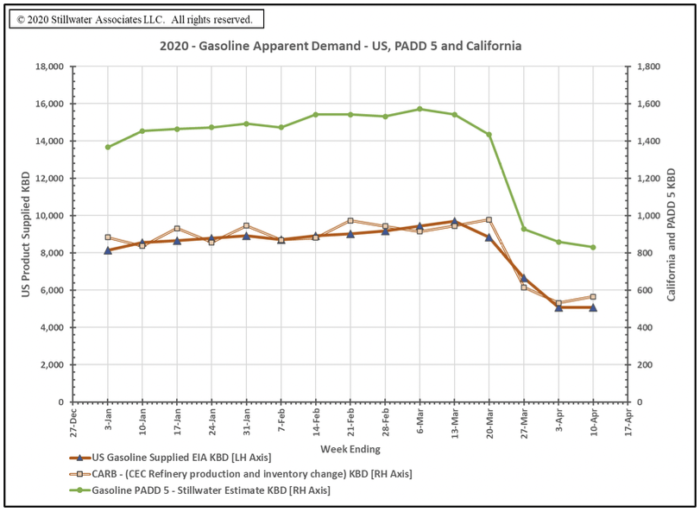 LCFS and COVID-19
This decline in gasoline demand would significantly reduce the demand for California’s Low Carbon Fuel Standard (LCFS) credits since the petroleum portions of gasoline and diesel generate the LCFS deficits that represent the demand for LCFS credits. Federal Renewable Identification Numbers (RINs) demand will be impacted as well, as the petroleum portion of gasoline and diesel generate the renewable volume obligations (RVOs) that represent RINs demand under the federal Renewable Fuel Standard. We discussed how a demand decrease would likely impact the RFS program in a March 10th article.

A month ago, we saw a decline in the price of LCFS credits that coincided with the timing of California’s stay-at-home orders that restricted many business establishments, moved much of the workforce from offices to their homes, and restricted daily activities. All of these restrictions contribute to gasoline demand destruction and resulting LCFS credit deficits. On March 19th, in fact, LCFS credit prices fell below $170/MT, a price level not seen since April of 2019. This steep decline in credit price is shown in Figure 4 below. 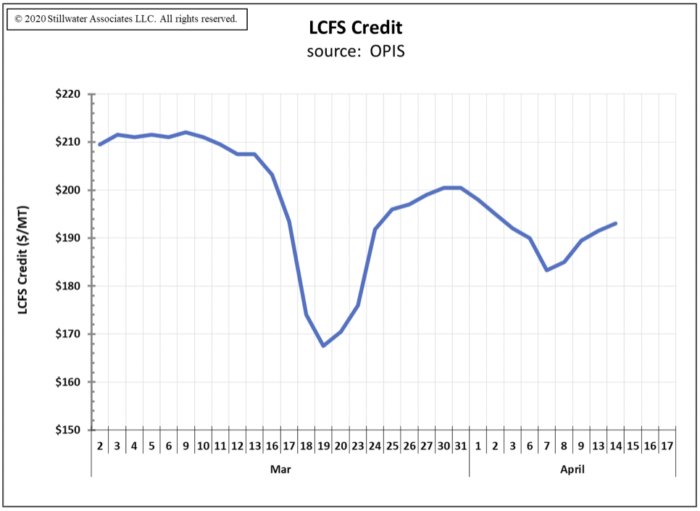 Since March 19th, the LCFS credit price has recovered and settled in at about 90%-95% of its prior level. With hard data available on the gasoline demand destruction, however, refiners may be altering their LCFS credit buying and holding targets as their ongoing deficit generation decreases. Any significant changes in entities’ LCFS credit purchase practices would also affect credit prices.

What is hard to predict is how credit generation is responding to lower fuels demand and oil prices. Other than ethanol, which should decline proportional to gasoline, supply of and demand for the other low-CI credit generating fuels will depend on whether they are substitutes for gasoline or diesel. Usage of certain low-CI transportation fuels that substitute for gasoline, like on-road electricity, should decrease for the same reasons that gasoline has decreased – significant decreases in driving due to coronavirus fallout. We have yet to see destruction of diesel demand in the data, so fuels that substitute for diesel – CNG, LNG, renewable diesel, and biodiesel – are less likely than gasoline substitutes to see declines in usage at this point. This lack in diesel demand decline is probably due to the reliance of our logistics, services, and delivery systems on these fuels. Therefore, for diesel substitutes, the prospects of “normal” credit generation is possible.

Unfortunately, we are living a 2020 pandemic remake of Groundhog Day as each morning we wake up not to Sonny and Cher but to news of more COVID-19 cases and deaths, a health industry scrambling for needed supplies, researchers working fervently on testing and vaccines, an economy and stock market that is looking for good news, growing unemployment rates, depressed crude prices, and gasoline demand that is shrinking fast. We hope that one morning soon “I Got You Babe” will no longer run through our minds when we awake.

We have entered into a period unlike anything we’ve seen before – a period in which specific analysis is difficult because the data lags so far behind the rapidly changing global situation. We are continuously monitoring all information available and will regularly provide analysis and insight to our subscribers through LCFS Newsletters and complimentary Flash Reports.

Stillwater Associates see things others miss, and we stand ready to partner with you. Contact us for personalized, in-depth analysis around GHG policies and downstream fuels markets.